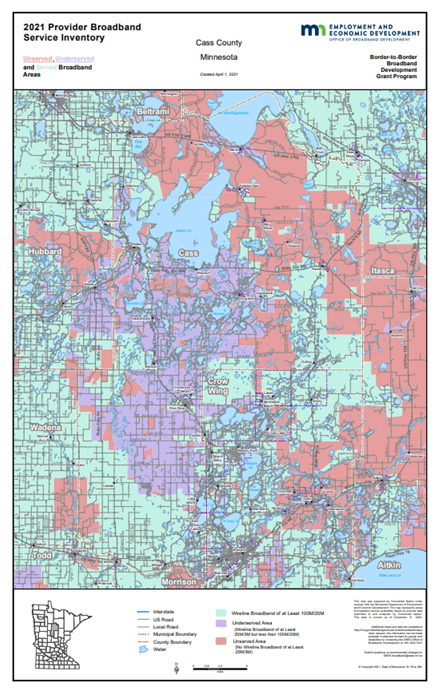 In the last year, CTC has been working (with special COVID-related funding from DEED) to reach unserved area. Also, CTC received CARES Act funding from both Crow Wing and Cass County to build broadband to unserved areas of Welton Road, County Rd 10, Border Lake, Little Pine Road and unserved areas in Lake Edward Township. Earlier in the summer, Lake Shore City put out a request for bids from broadband providers to help improve connectivity, especially in light of increased need do to COVID restrictions.

TDS is also in the area with about 60 miles of fiber between Cass and Crow Wing counties, which was scheduled to be built by the end of the summer (2021).

Cass County will benefit from a MN State Grant awarded in 2021:

The hope is that improvements will be seen in the next broadband maps. There is some danger that community members aren’t riled up because the access to 25/3 Mbps is fairly high, which means some people are probably satisfied while others can get by. Increased need for broadband due to pandemic restrictions may help light a fire and projected allocation of American Recovery Project ARP funds in Cass is$5,775,454; broadband is one possible use. That may help too. However until the maps come out or increase passion for broadband is evident, they get a red code.