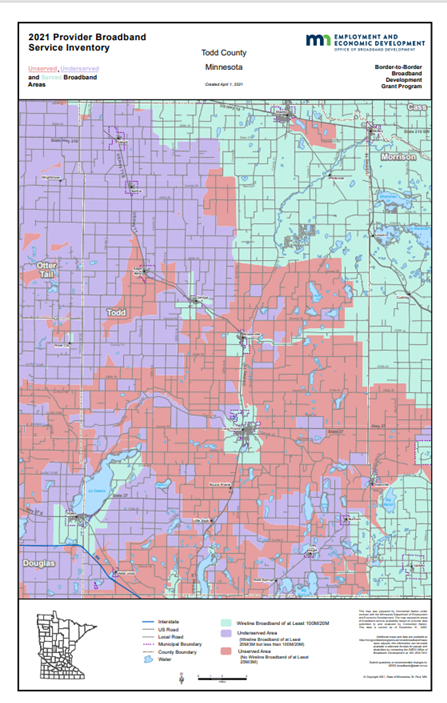 Working with the Blandin Foundation, Todd County has been focused on better broadband for a long time. They have benefited from MN Border to Border grants. In May 2019, CTC announced plans to build out to Todd County, which is likely the cause of the increase in access to 100/20 Mbps. They work hard but they run into barriers but there are some opportunities

Todd County will benefit from a few MN State Grants awarded in 2021:

This middle and last mile project will upgrade approximately 230 unserved and 39 underserved locations in Todd and Douglas counties.

Projected allocation of American Recovery Project ARP funds in Todd is $4,783,431; broadband is one possible use.

Todd County may benefit from intervention, such as the Blandin Accelerate program, a process to spur community acquisition and deployment of federal and state broadband funds, to find an alternative solution especially with state and federal funding on the horizon. They are a code red community.