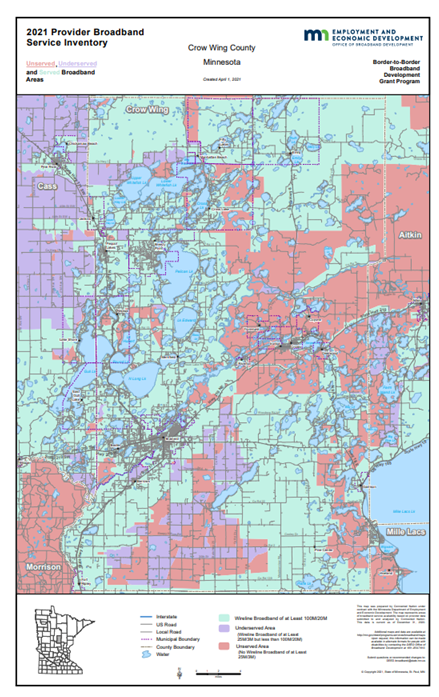 Crow Wing saw a nice upgrade to broadband in 2019; the coverage has remained stagnant since then. But the county decided to invest $1.5 million of CARES Act funding in broadband expansion with local provider, CTC last year. And CTC received funding in the last round of Border to Border grants. It appears as if neither of those had an impact on the last mapping effort so hopefully we sill see it in the next.

In May, TDS announced plans to install about 60 miles of fiber between Cass and Crow Wing counties by the end of the summer (2021). In August, Crow Wing County was awarded $4,495,340 for broadband improvement from the MN Department of Employment and Economic Development (DEED) from the Small Cities Coronavirus Community Development Block Grant Program. Also projected allocation of American Recovery Project ARP funds in Crow Wing is $12,617,017; broadband is one possible use.

This last mile project will serve approximately 180 unserved locations in a portion of Ross Lake Township in Crow Wing County.

With an influx of actual and potential funding and a couple of engaged providers, Crow Wing get code green.

For a list of community broadband adoption projects, see the Blandin matrix…https://blandin-staging.bicycletheory.net/content/uploads/vy/BBC_2015-16_Project_Matrix.pdf