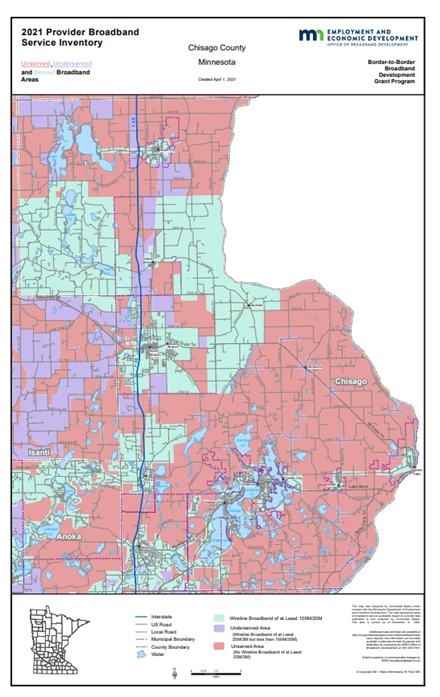 Like several other counties, Chisago County has areas where there is one national provider (or another). Often national providers are not as engaged in rural areas as providers with roots in the community. Chicago has found creative ways to get around that in several towns in the county.

Chisago County keeps working, keeps engaging. They are a Blandin Broadband Community (BBC). You can hear them with other BBC folks in the video below, as they talk about how they are planning to respond to federal funding opportunities, such as American Recovery Plan and Community Project funds.

Through BBC, they have done a survey, where they learned that 60 percent of those surveyed not happy with broadband speed or reliability. They have also hosted a range of projects to promote broadband use and adoption. (You can see more in the video below.)

Projected allocation of American Recovery Project ARP funds in Chisago is $10,973,149; broadband is one possible use. That may help.

Few counties are as engaged as Chisago is with promoting better broadband. They have been working for years. They have come up with innovative solutions. As a report from the Institute for Local Self Reliance pointed out, they have a plan to apply for State funding one community at a time until they’re covered. With a plan like that, they get a green code, despite their numbers!